This is the tale of how OH and I travelled to Brighton and went to a World Fantasy Convention, spent rather a lot of money (but not as much as we could have) and had an excellent time.

What is a World Fantasy Convention? In summary: a huge professional convention attended by hundreds of writers, artists, booksellers, publishers, editors, bloggers and enthusiastic readers from all over the world. There is a great emphasis on appreciation of fantasy, so all the honoured guests, the networkers and the fans can get down to the grass roots of why we all do what we do. It's an enormous celebration of genre, a weekend-long party and/or business catch-up. Famous faces are gawped at, red wine is quaffed with abandon, promises are made - and broken - to not buy books, bad, blurry photos are taken, new bookmarks and giveaways grabbed off tables, reasonable bedtimes are missed (and often breakfast) and business cards swapped.

For a frugal wench with a decidedly unfrugal hubby, temptations and pitfalls abound. Take the dealer's room for example... As soon as you arrive and register, you get to pick up a dozen free books. That doesn't stop you getting all big-eyed when you see more of the things to buy. Waterstones won't stock a twentieth of these! And they are cheaper, too... bargain books! Bargain lovely things... but oh, so very many of them...

And sometimes swords, the like of which a Tolkien elf might wield. ﻿﻿
I was very pleased at managing to find cheaper hotel accommodation very near the convention hotel. On recommendation, I tried the Premier Inn - actually from a friend who got confused and was staying in the Travelodge. In fact, most of our friends were staying in the Travelodge... (no, I don't think they told us a different hotel on purpose). But the hotel room we had was spacious, comfy and quiet. And Lenny was no trouble.

I also used my Network Rail card and Train Genius to get a bargain train price. We had to take a specific train from Northampton (which was unfortunately very crowded), change twice (seats - hooray!) and could reverse the journey back on Sunday at any time before 18.25. Total 3 nights' accommodation and transport for the pair of us: £277.00.

Having been to a World Horror Convention before, we knew there were bound to be a lot of things to cart home, so I took our shopping trolley. This turned out to be very useful indeed. I also prepared for the journey by making giant spicy veggie pasties - just the thing for replacing energy lost through lugging -  and the Bite card for cheaper drinks.

Warning: lots of linked names now occur as I name-drop like crazy!

Greeting us at registration was the lovely Pixie Puddin'  handing out badges. We also saw our friends Andrew Reid, and Dave Lally, already run off their feet as red-coated volunteers. Some of the volunteering people were barely a blur, we hardly saw them. Some appeared to us only in the form of an avatar, sending a tweet every now and then. Every time we bumped into Andrew and Alasdair, though, they seemed remarkably cheerful, even though bits of Andrew were dropping off (toenail - ouchie).

It being early in the con, we gravitated towards the most expensive bar of the hotel, fools that we were. Here I was elbow-twisted by OH into acquiring a golden ticket to stop my Go Sober campaign a day early. Paul Cornell couldn't believe my defeatism! I accepted a delicious lemon drizzle cup cake from Kari Sperring, and said hello to the lovely Chaz Brenchley, who I haven't seen for ages, and who's now based in LA with his wife, K L Williams - who I also met. Then there was Sue Boulton and daughter, Kathy, and Del and Kim Lakin-Smith, Ian Whates and Helen Sansum, Neil and Gemma Beynon, Nick and Ellie, Gareth L. Powell, Ruth Booth Adam Osbourne and loads of other peeps.

It was all so very exciting, OH had to have a little lie down, so he didn't accompany me to go to the David Gemmel Awards. These awards were founded in honour of the legendary David Gemmel by the just as legendary, I think, Debs Miller - or Miller Lau. Debs passed away earlier this year, and tribute was made to her in the awards ceremony.

After the ceremony, we attended a very lavish reception with lots of wine and nibbles on offer. I went to get a copy of the book, having completely forgotten I had one for helping out with it - brilliant!

And so, the wine flowed (free and freely). Quite tipsy, I used up all my bravery in chatting to artist Jim Burns. He was great fun to talk to. as were Ann Lyle and James Barclay...

Friday: might have missed a bit. Breakfast was a speedy Subway as we failed to make a reading. So the first panel-type-thing of the day was Gillian Redfearn's Guest of Honour interview with Joe Hill.  At noon. Gillian was witty, Joe was funny - it was really very good. 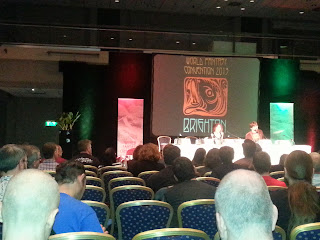 Neil and I then grabbed a Thai lunch and came back for the Terry Pratchett interview, which we watched in the company of Farah Mendlesohn. It was great to see Terry receive such tremendous support and to hear about his latest creative projects. It was also heartbreaking... PCA is such a cruel disease. 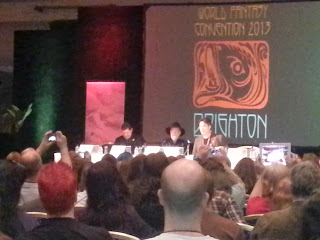 After Terry Pratchett's interview, it was very difficult to leave as there were so many people there to watch him. So, we waited things out and chatted with fellow Northampton Science Fiction Writers Group member, Mark West, and his friend Sue Moorcroft, who we thanked profusely for recommending the hotel for our honeymoon in Malta. We then went along to see Danie Ware at her book launch for Ecko Burning, and also picked up some books by Francis Knight, as they had a bit of a deal on together - and they had Pimms and chocolate cake which was jolly nice, and we chatted to Peter Hamilton and Charles Rudkin.
I've been a fan of Tannith Lee's work for years - though she has written so many books, I've a lot to catch up with. It was lovely seeing her interviewed by my friend Ian as she was presented with a Lifetime Achievement Award.

I then lost OH for hours as he went to the mass signing to get two books signed by Michael Marshall Smith (for whom I once narrated a short story for Pseudopod), and my copy of The Doll's House signed by Neil Gaiman. However, he didn't have anything for Joe Hill to sign, so asked for some in-jokes from his GoH interview to be daubed on his body. Neil Gaiman then couldn't help but add a little dalek...
It then went crazy, as OH got written on by a lot of people including Paul Cornell, Ellen Kushner, Frances Hardinge and everyone we were drinking with in Bar 106.


Meantime, I was downstairs in bar 106 consoling myself at the Tor UK party with several red velvet cupcakes. He was gone ages - sniffle. But he did it for me! Pity then, that we seem to have lost the books somewhere. Sad face.We had fun later though and met lots of new peeps and I had squiffy conversations with James Worrad, Damien G Walter, James A. Moore, A J Dalton, Adrian Tchaikovsky, Simon Gilmartin  and Sammy Smith. 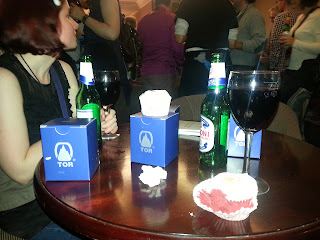 On Saturday, a valiant attempt was made to find a proper full English breakfast in Brighton. You'd think this was possible? If only we'd gone to Wetherspoons! But we tried to find a nice caf' or something and ended up in faux-rustic place with benches and dried chillies and chalkboards everywhere. Baked beans were an extra pound!  Normal beans!!! Nothing fancy. Also, the staff seemed a bit put out to have us there, and when it turned out service wasn't included, we decided it was. I think I left 35p change.

We went to a panel when we got back - about the sorts of things editors don't want to see, moderated by bossman Lee Harris, then picked a party to go to. We picked Amazon's... they had beer on offer and people to answer questions about self-publishing. And that's about all I'll say on that...

We managed to find a jolly decent pub for a jolly decent tea, then I did a quick change ready for my poetry performance that night. It was brilliant to have Sue, Kathy, Neil and Gemma come in to watch me, and I was in some really god poetical company. Joe Haldeman was there!!! and Roz Kaveney, Amanda Hemingway, Andrew Hook, Sophia Wessex, Cardinal Cox, Roy Gray...

...and the night continued merrily and ended with a good idea. And more will be said, but for now, part one is done.

Don't be shy... Say hello! I love to read your comments!